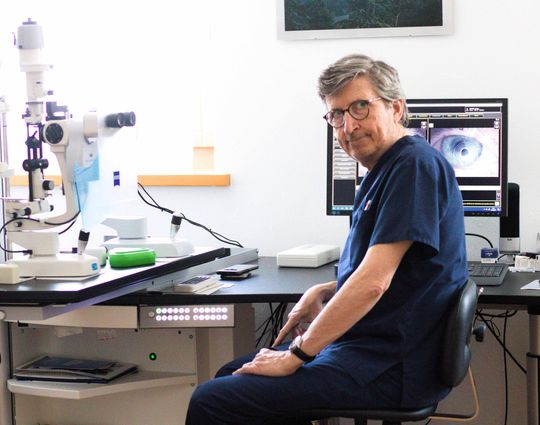 Welcome to the ophthalmological practice of Dr. med. Lodovico Dubini in Samedan. My practice, opened in August 2013, is equipped with the most modern technical apparatus for exact examinations and diagnoses.

My specialities include microsurgery for cataracts and glaucoma, surgical operations on the eyelid for medical and aesthetic purposes, as well as laser and medical treatments for retinal diseases. I also have a lot of experience in strabismus operations on children.

I am a member of the Swiss Medical Association (FMH), Società Oftalmologica Italiana (SOI), American Academy of Ophthalmology and the European Society for Cataract and Refractive Surgery (ESCRS).

 Appointments by phone and e-mail.

 1986 Degree in Medicine and Surgery at the University of Milan

 1989-1995 Research activity at the scientific institute E. Medea in Bosisio Parini and in the context of this activity work as assistant at the paediatric ophthalmological centre

 1995-1998 Worked as an ophthalmology assistant at the Ospedale A. Manzoni in Lecco

 Since 2005 Free activity as an ophthalmologist in the provinces of Lecco, Como and Bergamo

 August 2013 Opening of the ophthalmology practice in Samedan